Quantitative: Why You Need Stories 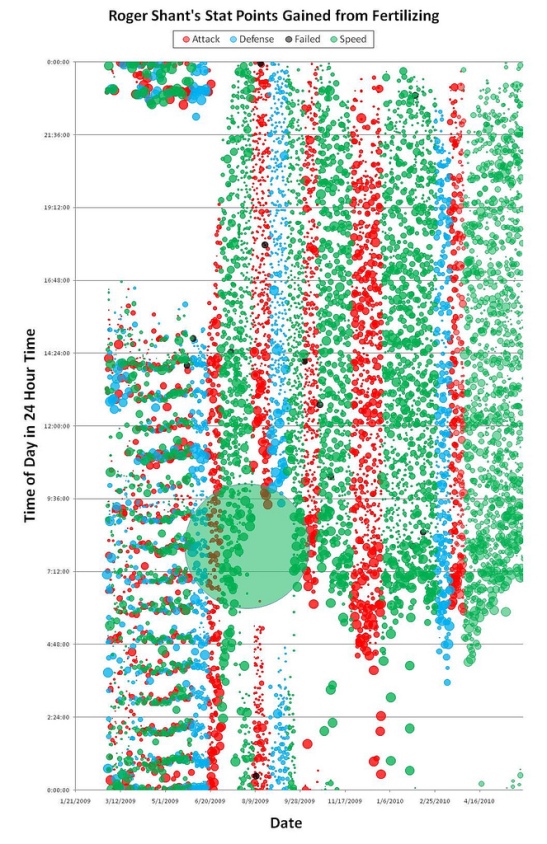 I want you to take a look at these visualizations. These are all charts depicting what skill a Plant Wars player is training, as well as how many stat points they receive as a result of their fertilizing of their plant. (There is a direct correlation between the amount of fertilizer used and the stat points gained. More fertilizer = more statpoints. So, the size of the bubbles indicates both the number of stat points gained, as well as the amount of fertilizer used.) All of the charts are on the same time scale, and so you can compare them to each other vertically.

Now, what I want you to notice in these charts are the large white spaces, which are times with the player is not fertilizing (and indeed, likely not playing the game at all, possibly even sleeping). Notice that around June-July 2009, the location of the white spaces begins to migrate. (This is most obvious in Roger Shant’s graph).

Now, when I first noticed this down-time (I call it that since I don’t know if they are sleeping are not) migration, I assumed that someone had had a shift change at work, or started a new semester. However, after seeing the same pattern on the same timescale across four different players, I began to think something was rotten in the state of Denmark. I assumed that something had gone horribly wrong with my data. Somewhere in the processing, something was terribly, terribly wrong. Maybe the log files themselves were corrupted. However, after hashing this out with Jon and ruling out all of the potential causes we could think of, we decided that all of these players might actually have changed their schedules at the same time. Indeed, because they are all really active players, it’s possible that they were changing their down-time schedules because of each other.

However, it’s impossible to know without asking them.

I can speculate all day long on why this pattern appeared. I can talk myself blue in the face spouting ideas and hypotheses on what exactly caused this shift in down-time.

But I won’t know. In fact, I can’t know, not until I ask the players whose data I’m looking at. Only once I have the story to connect with the data will the patterns in the numbers make sense. Only when I have the story and the data can we paint a complete picture.

For instance, notice that large bubble that appears on all four charts? That was another weird thing in my data that I assumed was a mistake. I asked Jon about it, and apparently there had been a server issue which had potentially eaten the stat points that players had gained during the day. So, on that day he gave players a huge stat point reward for fertilizing, to compensate for the stat points that the server issue had deleted.